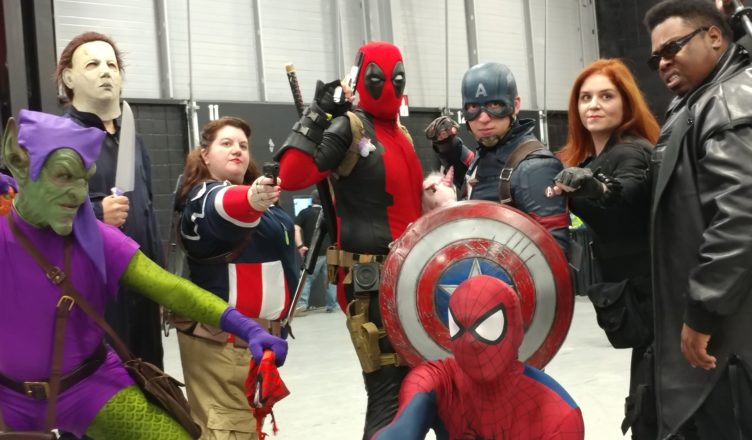 See the full article and more photos at http://www.themovieblog.com/2016/the-new-jersey-comic-expo-makes-its-mark/ “I was not expecting to go to another comic convention this year but the New Jersey Comic Expo rolled into town and forced me into a change of plans. I was pleasantly surprised at the enthusiasm and energy of this particular comic con for not only featuring guests that no longer appear at the New York Comic Con but also offering an energy and atmosphere that has gone completely absent from the larger shows. Lines were much shorter, people were more friendly, and navigating the show floor wasn’t nearly as much of a chore as I’ve grown accustomed to over the years. It was like New York Comic Con 2008 all over again and I had no idea how much I missed that notion.

The show featured artists David Finch, Mark Bagley, Neal Adams, Adam Kubert, Rags Morales and a heckuva lot more. Plus, the cosplayers! They may not have that extra little tinge of professionalism as seen in the New York shows but man alive were these guys enthusiastic about the attention?

Head over to our Facebook page with more images in full resolution.

All in all I was pleasantly surprised by the show. It was a throwback to conventions of my youth that were not overwhelming with attendance or suffer from split focus as it wasn’t trying to be a Comic/Anime/3D/technology/movie/toy convention all in one. It reminded me of the Dynamic Forces conventions of old and that’s great company. You know what constitutes a panel at this convention? Some comic artists and writers sitting with a room full of kids and giving them tips on their art and writing in an intimate setting. You don’t get that at New York Comic Con and I imagine it’s not something offered at San Diego comic con anymore.

Absolutely fantastic show and I urge folks to attend as I worry that this show will follow along in the footsteps of the New York Comic Con and grow wildly popular if they keep securing the comic talent that only make a few signing appearances like Adam Kubert and Mark Bagley.”